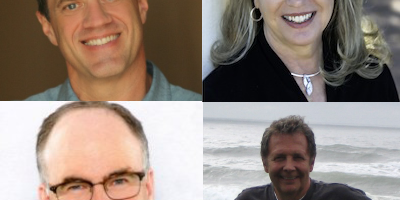 Bios for our panel of guests:

Dom Testa is the author of 14 published books, with a 15th on the way. He’s a hybrid author, having been published six times by Tor/Macmillan in New York, and as an independent author for eight of his titles. His books have been recognized as Top Picks by the American Library Association, and also purchased by Scholastic Book Fairs for nationwide distribution. His first novel won the International Grand Prize from Writer’s Digest Magazine, along with an EVVY Award from CIPA. For almost 25 years Dom has hosted the top-rated morning radio show in Denver on Mix 100.

Dom’s first independently published CIPA Evvy Award-winning book, was The Comets Curse. He was a CIPA member, served on the CIPA Board of Directors and was the first president of the CIPA Education and Literacy Foundation.

And, on top of everything else, he makes the best spaghetti sauce in Colorado, and has kept a Ficus tree alive for 26 years!

Elaine Dumler is a speaker/trainer for corporate and military audiences, a skill she uses to market her books. Since 2002 she has focused on helping military families separated by deployments and assignments. Elaine garnered connection ideas and resources from over 3500 military families and compiled the best ideas into two resource books; I’m Already Home and I’m Already Home…Again. Her third book, The Road Home, was written to cover the unique challenges of returning from deployment. All three titles were independently published by her Frankly Speaking imprint and all three received CIPA Evvy Awards. Guidance Group Publishing in NY then hired Elaine to write 24 titles of Flip-Tip guides that are still carried in their military catalogs. This led to media coverage in over 100 publications and many TV appearances, both local and national. She is honored to be the recipient of ABC TV’s “7 Everyday Hero” award for establishing the “Free Flat Daddy” project. www.ImAlreadyHome.com

Dr. Jeff Wells, DVM, practiced veterinary medicine in the foothills of Colorado before beginning his publishing efforts. A graduate of Iowa State University’s College of Veterinary Medicine, he cared for many types of domestic species and some not so “domestic” during his career. Before being acquired by St. Martin’s Press, All My Patients Have Tales was the winner of two CIPA Evvy Awards and one national Independent Publisher Book Award and was actually Jeff’s second independently published book after A Veterinarian’s Handbook for Horse Husbands that was published by his Hadley, Inc. imprint. His most recent book, All My Patients Kick and Bite is a highly amusing, uplifting and entertaining follow-up to All My Patients Have Tales. The late President Emeritus of the Humane Society of the United States, John Hoyt, likened Jeff Wells to another veterinarian author, the legendary James Herriot.

In 1993, he founded Mark Graham Communications and has since collaborated with individuals on three continents on projects ranging from biographies and screenplays to business books and children’s books. Many of those pieces are published or due to be published.

He has recently completed the screenplay of The Natanz Directive for Patriot Pictures.  He is currently finishing a film adaption of The Interview for Unique Features.  Both films are in development.

He has also independently published a noted book of inspirational verses called Parents Are Diamonds – Children Are Pearls that was published under his Amur Books imprint. And co-Authored the Self-Published title, The Interview, with David Hurley.

Mark graduated from Colorado State University with a Bachelor of Science degree in Business Management and a Bachelor of Arts in Journalism. He lives in Denver with his wife.

His book design company, Graham Publishing Group, has helped nearly 200 clients independently publish their books. Visit www.markgrahamcommunications.com for a list of his credentials and services for authors.